In a video making rounds online, it shows when men of Eastern Security Network, ESN, arrived the area and fired gunshots in the air, forcing the herdsmen and their cows take to their heels.

As the herdsmen were running, two of their cows were left behind and unfortunately, Eastern Security Network members gunned them down. 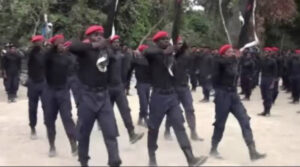 It was gathered that this Enugu community had been pleading for weeks to the herdsmen to stop destroying their farms and yet they refused.

However, while the herdsmen were been chased out of the bush, a serious warning was given to them not to return if they value their lives, because their activities would no longer be tolerated in the bushes of the region.
See video below;