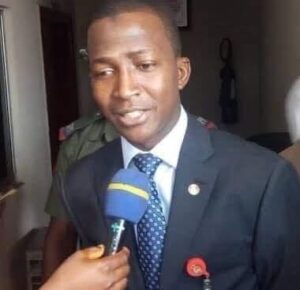 On Wednesday the 24th of February, 2021,40 -Year -Old Abdulrasheed Bawa was confirmed as the Chairman of the Economic and Financial Crimes Commission (hereinafter called “the EFCC”) by the Nigerian Senate , signaling a new dawn in the Anti- Graft fighting Organization.I defer with some persons who oppose his appointment as I am enthused by his appointment for two reasons:

1.He is a Youth ,I am an advocate of Youth in Government .

2.He is of the Course 1 of the EFCC Academy and It is high time Officials of the Organisation took control of same , as opposed to the Police running same .He is the first Core EFCC Staff Investigator heading the Organization.

About the allegations against him ;How come it is coming out now?If the persons peddling it are saints ,they would have alerted us immediately they knew of it.I have been in positions of authority and I know that when you about to be elevated ,your detractors come out with gimmicks to pull you down.

Having said that ,the new EFCC Chairman-Abdulrasheed Bawa should address the following issues plaguing the EFCC if he wants to succeed:

During the last dispensation ,the EFCC detained Nigerians indefinitely. When it was time to release the suspects, they would give the relatives of the suspects obnoxious Bail Conditions asking for level 14 and above Civil Servants or a House Owner with Certificate of Occupancy,a complete illegality as the Law on the Matter -the Administration of Criminal Justice Act,2015, provides that the first line of Sureties should be blood relatives of the suspects and the Law does not give the holding facilities powers to impose extraneous conditions ,not provided for by Law .When the family Members produce the Sureties, some times paying huge sums to the Sureties to do so ,the EFCC Operatives will now spend another 2 to 3 days to “confirm” the Sureties ,lying that they have done the letter to employer of the Sureties ,when they have not ,when the Constitution of Federal Republic of Nigeria ,1999 (As Amended ) stipulates in Section 36 that suspects should not be detained for more than 24 Hours ,after arrest .The Situation has however improved since the removal of the last Chairman,,but It could be better .

I wish to use this medium to commend the Head of Legal Services of the Benin Zonal Office of the EFCC ,Aruga Esq., for his professional manner of handling issues and following due process of Law in executing his duties .He is a thorough breed professional!I have never met him in my life ,I have however followed his conduct with utmost delight .Let us not just condemn,but also commend when necessary.I know his stand would not have been possible with out the approval of his current Zonal Head -Mr .Mukhtar and I commend him equally for his adherence to the Rule Law .Public Officials should know that Society is watching .What can the Society say about you ,as a Public Official?Have this in mind ,when dealing with the Public .

The EFCC should desist from investigating Matters pertaining to contracts as the EFCC is not a debt collector as has been stated in a Plethora of cases by the Supreme Court and other Superior Courts of Records .

The EFCC is the Economic and Financial Crimes Commission ,how come it investigates mainly Financial Crimes and it rarely investigates Economic Crimes ?We rarely hear about the following crimes :Oil Bunkering (Oil Pillage ),Under payment of Import Duties ,Currency Trafficking ,Forgery of Customs documents ,Customs Officers collecting money at borders and on the high way like high way robbers, NIMC Officials collecting money from poor Nigerians before attending to them for their NIN and National ID Card, it is called Bribery and corruption, how come we hardly hear any thing about Bribery ,mostly ,we hear about corruption.

The EFCC should follow the due process of Law in all its activities as it is a creation of Law .To this end ,the EFCC should stop the practice of using a mere letter to a Bank to freeze the Accounts of Citizens,they could incur damages .They should also stop the practice of writing with red paint “EFCC Keep Off” on Citizens’ Properties ,except they have a Court Order .They should also stop the illegal practice of seizing the cars of Citizens with out a Court Order.The EFCC Act provides for interim forfeiture of properties using Ex Parte Orders.Any cars seized with out a Court Order must be released forthwith. There should also be an electronic tracking system in place to track all seized properties and a public auction sale of same,after due process ,with an open bid ,open to public participation and public scrutiny,to ensure accountability and probity.As an Anti -Graft Agency ,the EFCC like Caeser’s Wife must be above board .

The EFCC should also know that Lawyers are partners in progress and not enemies .When they see a Lawyer ,they should accord him the requisite respect and co-operation.Lawyers make your work easier if you knew how to deal with them properly .They are Ministers in the Temple of Justice and EFCC Officials are Officers of the Law .Their functions are interwoven as the EFCC itself cannot prosecute with out Lawyers .So ,it is high time there was a synergy between the EFCC and Lawyers to preclude needless litigation and allow for a seamless operation of the Anti- Graft Agency .If you make working with you difficult for Lawyers,Lawyers will make it very difficult and some times impossible for you to work with others .

We do pray that the EFCC meets its mandate and reaches the objectives set by the Founding Fathers ,who created the Organization.

When you follow the due process of Law ,the Law will make the process easier for you !

Douglas Ogbankwa Esq., the Immediate Past Publicity Secretary of the Nigerian Bar Association,Benin Branch is the Convener of the Transperancy Bar Initiative.