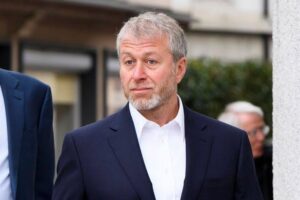 Chelsea owner Roman Abramovich has climbed to eighth on the Sunday Times Rich List after adding nearly £2billion to his net worth.

Abramovich added £1.945bn to his overall worth in the past 12 months thanks to some success in the steel and mining markets.

The list features the wealthiest, UK-based businesspeople – with Abramovich still holding a place on the list despite not stepping foot in the UK in three years due to visa issues.

The Chelsea chief instead has taken up residence in Israel – but was spotted in Sweden for the Women’s Champions League final.

The Blues were thumped 4-0 by Barcelona earlier this month, but Abramovich was spotted sweetly consoling Emma Hayes and her team with a rare public appearance.

However, Abrahomovich still has a way to go to reach the wealth of Sir Leonard Blavatnik, who takes the No1 spot in the 2021 Rich List.

The American-British-Russian businessman boasts nearly DOUBLE the wealth of Abramovich on £23bn.

Only one other company managed to breach the £20bn barrier, with property and internet gurus David and Simon Reuben worth a total of £21.465bn.

Further down the list, former Arsenal shareholder Alisher Usmanov sits in sixth – above Abramovich – worth £13.406bn.

Armed robbers disguise as vigilante members, rob residents of car, others in Kano

Armed robbers disguise as vigilante members, rob residents of car, others in Kano