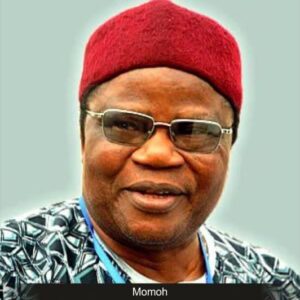 Confirming his death, his son, Abdulrasheed Momoh, said he died in a private hospital in Abuja, yesterday afternoon.

‘’Daddy has been ill for some time due to old age. He died some hours ago in a private hospital in Abuja. I am in Lagos now. I will go to Abuja tomorrow, ‘’

The death of Prince Momoh, who left indelible marks in journalism, law, administration and political strategy elicited eulogies, yesterday, from some eminent Nigerians.

President Buhari said Prince Momoh stood with him through thick and thin, adding: “His brand of loyalty is very rare in the politics of today. I will greatly miss him.”

The President, in a statement by his Special Adviser on Media and Publicity, Chief Femi Adesina, recalled that as chairman, Media and Publicity of the All Nigeria People’s Party (ANPP) Campaign Organisation in the 2003 and 2007 elections as well as Chairman of the Congress for Progressive Change (CPC), the late Auchi Prince contributed in no small measure to the growth and strengthening of the organizations, leading to the eventual formation of the All Progressives Congress, APC.

President Buhari commiserated with the media industry on the loss of a veteran, who put in a lot to raise the bar of the profession in various ways as editor, manager, administrator, President and Trustee of the Guild of Editors, urging them to sustain his legacies.

He also condoled with the Auchi Kingdom, the government and people of Edo State on this great loss, the President prayed that God will grant the departed eternal rest and comfort family, friends and political associates in this period of grief.

His words: ‘’Prince Momoh was truly a princely journalist. He was a powerful member of the intellectual wing of the profession. He brought deep thoughts and serious mindedness into the profession. He was nicknamed lawyer-journalist by late Dr Nnamdi Azikiwe and he lived up to it. He left an indelible mark in the media. God bless his soul.’’

Dennis Idahosa, Member Representing Ovia Federal Constituency, Edo state expressed shock and sadness over the death of Prince Tony Momoh, describing it as a huge loss to Edo and the nation at large.

The member representing Ovia Federal Constituency in the House of Representatives in a statement by his Media Aide, Friday Aghedo described Momoh as an accomplished journalist, politician and patriotic Nigerian.

Also, former Governor of Anambra State, Mr. Peter Obi, described Prince Tony Momoh as a renowned Journalist who was committed to the good of the country.

Mr. Obi prayed God to grant him eternal rest, and called for the continued deepening of the ethos of journalism through looking up to the legacies of men such as Prince Momoh.

The Dania of Auchi Kingdom, Alhaji Usman Abudah; and Minister of State, Budget and National Planning, Prince Clem Agba Monday described the death of Prince Tony Momoh as a big loss to the country and Edo State.

The Dania of Auchi Sacred kingdom, Etsako West Local Government Area of Edo State where Prince Momoh hailed from, Alhaji Usman Abudah, described his death as “a big loss. It is a loss to the Ikelebe dynasty of Auchi, it is a loss to Edo State. He was a self-made man, his yes was his yes, he will never look into any matter because you are his relation, he will give verdict on any issue how he sees it. He was the second of the mother’s three sons for Momoh I.”

According to Abudah, who Momoh’s cousin, the deceased attended Government School, Auchi from where he proceeded to Abudu Grade III Teacher’s College from there he went to Government Teachers College in Abraka, present day Delta State.

Former President of the Trade Union Congress, TUC, Comrade Peter Esele, said: “It was a big loss to Nigeria and Edo in particular. A worthy son of Edo, he contributed so much to everything he found himself doing. He was well known in the media and politics. Whatever he touched became gold. He will be greatly missed, and I pray God grants the family d fortitude to bear his demise.’’

Former Governor of Delta State, Chief James Onanefe Ibori said that with the passing of Prince Tony Momoh, Nigeria has lost a remarkable elder statesman – a renowned journalist, the first Chairman, Board of Directors of the Independent Newspapers Ltd (INL), an eminent public servant, a totally detribalised Nigerian, and a pillar of the APC, who nevertheless, had a rewarding relationship with members of the other political parties.

Chief Ibori said: “Though Prince Tony Momoh and I were never in the same party all through, he was civilized enough to respect the boundaries of friendship.”.

Ibori recalled that he and the late Prince Momoh had a rewarding friendship that lasted for decades. This bond became stronger when Prince Momoh graciously served as the first Chairman, Board of Directors of the Independent Newspapers Ltd (INL). He said that in that capacity, Tony Momoh’s professionalism was on display as he reached into the great depths of his experience and journalism prowess to help give birth to an exciting newspaper stable which introduced many novel features into Nigerian journalism.

Also speaking, Minister of Transport, Rotimi Amaechi, described late Momoh as a Nigerian compatriot and colossus whose services impacted national development especially in journalism. According to Amaechi: “It is sad to witness the death of such a colossus and a literary giant especially in journalism. He is a Nigerian patriot whose services impacted on the development of the nation. May God give his family the fortitude to bear this irreplaceable loss.”

His footprints on sands of time

Momoh started his journalism career as a sub-editor at the Daily Times in October 1962, rising steadily through the ranks to become Editor and deputy general manager (June 1976 – May 1980).