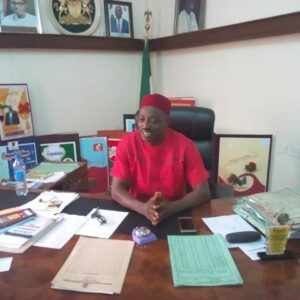 Hon Patrick Aguinede of APC has been declared the valid and duly legally recognised elected Chairman of Esan West Local Government Area Council of Edo State by Edo State High Court No 4, Benin City Presided over by Hon . Justice D.I. Okungbowa in suit no B/11/2020.

In the judgment delivered on the 29th day of January 2021, the learned trial judge declared the purported removal of Hon. Patrick Aguinede by Edo State Governor as null and void.

The Court directed Hon. Patrick Aguinede to resume office as Chairman of the Council immediately.

Hon. Justice D.I Okungbowa granted all the prayers contained in the originating Summons filed on behalf of Hon. Patrick Aguinede and by the Law firm of West-Idahosa & Co.

The learned Judge held that Edo State Governor and the Government failed to comply with the Provisions of Sections 20 and 21 of Edo State Local Government Law, 2000 (as amended) in failing to consult with the Edo State House of Assembly and the grounds of suspension as provided by Law before suspending Hon. Patrick Aguinede was not followed.

The Court further held that since the purported suspension was void in law, every other action predicated on it was invalid. And held that the 1st-4th defendants abandon their notice of preliminary objection challenging the jurisdiction of the court on the ground of filling it in High court instead of in the National industrial court after counsel to the claimant joined issues with them and even draw their attention to it at the point of hearing the case but they opted to abandon it.

The Court awarded the sum of #200,000 as costs in favour of Hon. Patrick Aguienede