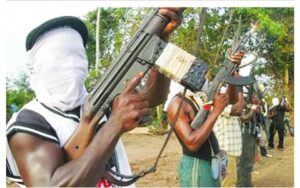 Indications emerged yesterday that gunmen who kidnapped a couple at Ewatto in Esan South East local government area of Edo state are demanding for fifteen million ramson before they can release them.

The man, a classroom teacher and his wife, identified as Mr/Mrs Paul Aluola, were kidnapped by heavily armed men on Monday afternoon.

Mr Aluola is said to be a teacher at Iriwa Primary School, Ohordua, while his wife is a petty trader.

Mr and Mrs Paul Aluola before the incident had regularly travelled on the road which links Edo and Delta state through Agbor, Ekpon, Ewohimi and Ewatto.

Source close to the area disclosed that the suspected gunmen had “called the family members for ransom; they are currently demanding for the sum of fifteen million naira as ransom before effecting the release of their victims.”

According to the source who pleaded anonymous, “The family members are wondering how a teacher can raise such amount of money.”

It was learnt that the couple were travelling along the Ewatto – Ubiaja road, and had approached the bridge at Ellah River, when the gunmen suspected to be hesdmen, opened fire on the vehicle in which they had travelled and forcing them to stop.

The kidnappers had dragged the victims off the vehicle and took them into the bush.

It was further gathered that the hoodlums abandoned the vehicle at the scene of crime while academic activities at Iriwa Primary school reportedly could not hold yesterday due to the ugly incident.

Commissioner of Police in the state Mr. Johnson Babatunde Kokumo and the Police Public Relations Officer (PPRO) SP Chidi Nwabuzor when contacted severally yesterday on the incident refused to answer calls to their GSM lines.