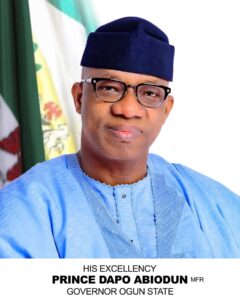 The Ogun State Governor, Prince Dapo Abiodun on Tuesday sworn in an ally of former President Olusegun Obasanjo, D. Femi Majekodunmi and a governorship candidate of  the African Democratic Party in the 2019 election,  Gboyega Isiaka, as board chairmen in the state.

While Majekodunmi was inaugurated as Chairman for State Universal Basic Education Board, Isiaka was sworn in as chairman Ogun Free Trade Zone.

The swearing in of another batch of chairmen and members of 16 state boards and commissions was held at the June 12 Cultural Centre, Abeokuta.

Others sworn in included  the Publicity Secretary of the state  Caretaker Committee of the All Progressives Congress, Tunde Oladunjoye as Chairman, OGTV Management  Board.

Also, two former speakers of the state House of Assembly, Titi Oseni-Gomez and Suraj Adekunbi as  Chairman of Nigerite and Senior Consultant  respectively.

The governor urged the new appointees to be agents of positive changes in their respective MDAs.

Abiodun said, “This administration will not tolerate any act that is not in tandem with the overall vision of the government.”

Speaking on behalf of the appointees, Majekodunmi, noted that the statewas lucky to have a focused, versatile and principled man directing the affairs of the state.

Davido Reveals How “FEM” Almost Landed Him In Trouble