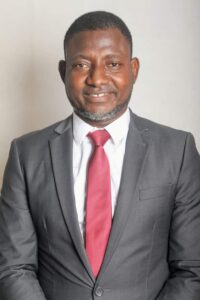 Otoagua Amahdin Amos Cole was born in Ewohimi in the late 70s into the family of Pius Akonure Otoaguah of Ewatto in Esan South of Edo State. In order to give him a sound education and to broaden his horizon, his mother moved him to the city of Lagos where he attended Bariga Primary School and the very popular C.M.S. Grammar School for his secondary education. He then proceeded to the Lagos State Polytechnic where he studied Banking and Finance. In 2002, he sought admission into the University of Benin and was admitted to study industrial mathematics but later changed to the faculty of social science to study political science where he found love in political economy. Still not satisfied, he has also

studied for a Master’s Degree in Comparative Politics and Developmental studies at the University of Benin, and an Executive Master Certificate on project management with British School of Project Management.

Amos cut his teeth in student politics at the Lagos State Polytechnic while serving as a member of his department’s executive. He was a radical member of the student representative council and later became a member of the electoral committee at the School of Management and Business Studies. He was later to become Vice President, Policy Adviser, and President of Junior Chamber International Nigeria (JCI) Lagos State Polytechnic and University of Benin.

Upon completing his education in the University, he set out to bring about change to his home state and relocated to Benin City after his Youth Service in Abia State. He joined the struggle for redemption of Edo State through the Oshiomhole Youth Alliance which also gave him an opportunity to fulfill his desire of practicing his training as well as see a drastic change in the Nigerian political order. Amos saw in the man Adams Aliu Oshiomhole a true and ready instrument of such change.

In his own words, “Oshiomole is a master of the crowd, articulate in rhetoric, rugged in the struggle and urban Hoi Poli and there could be no other mentor than Oshiomhole and no other time was better than then to start the journey into my dream”. Mentored by two great generous men, Mr Louis Ajie, and a passionate leader armed with Mr Victor Eboigbe.

Amos sees himself as an asset to the young global generation yearning for change -aptly departing from the old order and birthing into existence a welfarist state that put the masses first ahead of the elite.

Amos has since served in several capacities, including as Secretary and later President of the Oshiomhole Youth Alliance, State Coordinator Team Ribadu and presently Edo State /South -South  Cordinator of All Progressive Youth Forum(APYF). He is was a former member of the State Working Committee Godwin Obaseki Support Group.

He is a Contributor to National Association of political science students and is an avid writer who has published the following original works;

▪ “NYSC Metamophosis: The point to Note.”

He is the Founder of Development in Action an agricultural platform that believes that massive
employment can be attained through communal farming.

Under the administration of Comrade Oshiomole, he served as a Senior Special Assistant to the Governor of Edo State on Youth Matters .

Under the Obaseki led administration, he was at a time, Personal Assistant to the Edo State Commissioner of Women Affairs and Social Development. He is currently the Senatorial Youth Leader, Edo Central Senatorial District, All Progressives Congress (APC) Edo State.

He is a team player who believed in equality , justice and fairness. He is a family man and is happily married to Jane, and their marriage is blessed by God with children.

Congratulations on your achievements

We wish you a happy birthday, glow in good health and prosperity