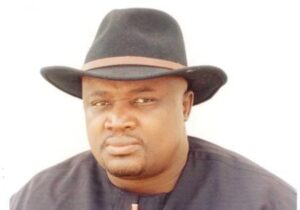 THE Federal High Court sitting in Yenagoa, Bayelsa State, yesterday disqualified Peremobowei Ebebi, the candidate of the All Progressives Congress (APC) from contesting in the Bayelsa West Senatorial by-election.

The presiding judge, Justice Jane Inyang, in a judgment on a case of forgery filed by Richman Samuel, a former Director of Domestic Matters, Government House, Yenagoa, upheld the plaintiff’s prayers and declared the APC candidate ineligible to contest.

The plaintiff contended that the academic credentials and voter’s card, which the defendant submitted to the Independent National Electoral Commission for the by-election, were forged documents.

Ebebi, who is a former deputy governor, emerged the APC candidate in a direct primary conducted in September by primary electoral committee headed by General Abdulsalam Dahiru (retd.).

The INEC had fixed October 31 for the Bayelsa Central and Bayelsa West senatorial by-elections. But, the commission, on October 22, announced the indefinite postponement of by-elections in six senatorial districts and nine state constituencies, including Bayelsa, due to the #EndSARS nationwide protests.

Justice Inyang further held in her ruling that the voter’s card which the Ekeremor-born politician submitted to INEC “as declared by his (Ebebi’s) father, bears a different age and, therefore, contradicts other of his documents and his filed INEC forms.”

She also noted that details presented showed that Ebebi’s West African Senior School Certificate, which the defendant used to gain admission to study law at the Rivers State University of Science and Technology, had only two credits, which fell short of the required credits in five relevant subjects, including English Language and Literature in English.

Counsel for the plaintiff, Mr Reuben Iguaba, explained that in a similar suit filed by some members of the APC challenging the legitimacy of the party’s primary election, the court also gave judgment against the former deputy governor.

Iguaba told reporters that the court also declared that the APC candidate was not validly nominated, and disqualified him from contesting in the Bayelsa West senatorial polls.

He said: “The first case was on presenting false information by the APC candidate. Some of the registered APC members from Bayelsa West Senatorial District applied to the INEC to verify the authenticity of the certificates submitted by Chief Ebebi.

“And they discovered that his voter’s card was a forged document, not genuine document. Not only that, he got admission to the Rivers State University of Science and Technology, Port Harcourt, with two credits to study law.”

Reacting to his disqualification, Ebebi said he would appeal the judgment.

Apparently referring to the immediate past Governor of the state and the candidate of the Peoples Democratic Party (PDP), Seriake Dickson, the APC standard bearer said: “My main opponent is just looking for a shortcut to the Senate. We will appeal the judgment.”