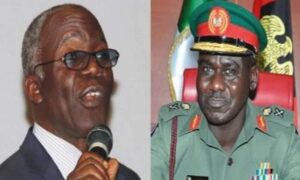 On Saturday, the Nigerian Army announced its plan to kick off “Operation Crocodile Smile” amid the ongoing protests.

Femi Falana, who is the Chairman of ASCAB, warned, “Buhari should not invite soldiers to resolve a purely democratic issue that calls for dialogue and constructive engagement.”

ASCAB noted that protests have common features across the world as seen in Hong Kong, United States, France, South Africa, Belarus and even in Sudan.

It added that in no instance were soldiers deployed to suppress the protesters.

“Nigeria wants to set another ugly precedence in world history,” the group said.

It reminded the Federal Government that Operation Crocodile Smile had been declared illegal by a Nigerian Court with competent jurisdiction following legal actions filed by Falana.

We urge President Mohammadu Buhari not to use soldiers to quell a peaceful, civil protest.

“The protesters have been lawful. The few cases of violence were associated with armed thugs disrupting the protests coupled with the shooting of protesters by security operatives.”

A Bill For An Act To Provide For The Establishment Of The Federal School Of Nursing & Midwifery, Sobe, Edo State; and For Related Matters Sponsored By Prof. Ihonvbere Passes Second Reading