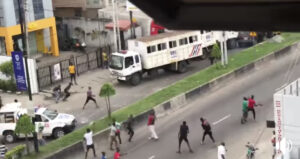 Footage trending online showed the hoodlums hurling stones and other harmful objects at the patrol vehicles belonging to the RRS.

The operatives were said to be plying the route to link a destination to the Lekki area in the state when the hoodlums started attacking them.

In a bid to escape unhurt, the operatives were also seen in the footage abandoning their patrol vehicles as they fled from the scene of the incident.

A source, who pleaded anonymity said the policemen were injured, adding that all the patrol vehicles were damaged.

The source said, “They are doing their rotation and they were on their way to change their men in Lekki but when they got to that area, they started attacking them and they injured a lot of the officers.

“They damaged four vehicles which they usually use in conveying the policemen for rotations. About 60 policemen were in the patrol vehicles when they were attacked by the hoodlums.”