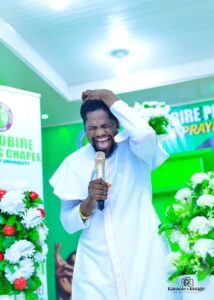 A High Court sitting in Akure, Ondo State, has sentenced a popular pastor and founder of Sotitobire Praising Chapel, Babatunde Alfa, to life imprisonment over the missing of a one-year-old boy, Gold Kolawole.

Mr Alfa was sentenced alongside five others, having been found guilty of the mysterious disappearance of the toddler from his church in November last year.

The cleric, whose church is at Oshinle quarters area of Akure, was accused by the missing child’s parents of kidnap and the boy has not been seen till date.

Mr Alfa had earlier told the court that he prayed and enbarked on a vigil to find the child, but the State Security Service provided two video clips as evidence against prophet.

In the video, he admitted knowing the whereabouts of the boy and confirmed that he told the parents of the missing boy to come through the right channel to beg so he could pray for the recovery of the boy.

They were found guilty of all charges.

The presiding judge, Olusegun Odusola, in his judgement said the circumstantial evidence presented by the prosecution proved beyond doubt that the cleric and others were guilty.

He therefore sentenced the cleric to life imprisonment.

APC: Consensus Chairman Set To Emerge, Tinubu Might Be Compelled To Step Down Presidential Ambition [Details]