Imansuangbon Makes History As He Is Voted As PDP National Delegate 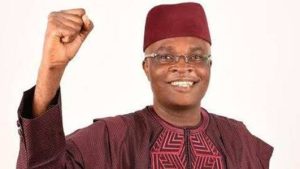 History was made on Tuesday, May 10th 2022 when Barrister Kenneth Imansuangbon, (aka Riceman) was overwhelmingly elected as the Esan South East Local Government Area of Edo State national delegate of the Peoples Democratic Party (PDP).

The election process, which was slated to commence as early as 8am, had to commence by 2pm as there was some grey areas of the exercise that needed to be ironed out. Eventually, the process commenced after the third attempt whereby two sets of officials were rejected by one of the parties one after the other.

The accreditation of the delegates from the recognized ten wards, statutory delegates and the likes went without much ado. It was the voting process that was heralded with loud protestation from one of the parties.

At the end of the day as the option A 4 that was accepted for the voting proper commenced the supporters of Mr. Agbonmere, led by Senator Odion Ugbesia, seeing that they were on the verge of losing stepped out of the hall.

The presiding officer, Edgar Atonigbe, did a count of the votes for Barrister Imansuangbon which was 156 out of the 206 delegates screened as qualified for the voting process.

Some analysts in their review of the election see it as a positive test for Barrister Imansuangbon’s aspiration to govern the state starting from 2024.