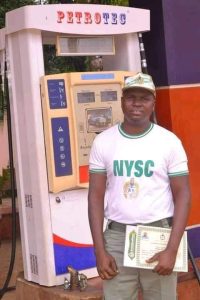 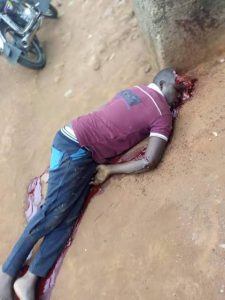 A young graduate of the Department of Agriculture, University of Calabar, Marvelous Sule Bambur, was on Saturday March 5, murdered by unknown gunmen in Anambra State.

The late Marvelous, an indigene of Taraba State, was shot severally in the head, with his skull ripped open.

An eyetwiness said , his attackers drove in a Toyota Sienna car. The eyetwiness also told our correspondent that the gunmen also shot dead, an Okada man, identified as Richard, who also died on the spot.

The late Marvelous performed his mandatory National Youth Service in the community and stayed back shortly after completing his service year. He got a job as manager at P& F Filling Station, Nnokwa.

Meanwhile, friends and colleagues of the victim have taken to Facebook to mourn his death.

“The senseless killings in the east must stop.

“The unfortunate incident that happened today in Anambra State that led to the death of my colleague, Marvelous Sule Bambur, has left all of us (the friends and colleagues he left behind) not just in deep shock, but in tears

“MB (as we fondly called him) was such an amazing personality; one that checks up on his colleagues every now and then.

“See ehhnn, your killers will know no rest and they’ll die a very slow and painful death. They can’t cause us so much pains and go scot-free, no! ‘Unknown gun men’ ending a life they didn’t create is the greatest sin against humanity.

“Again! The very country you called your own failed in her duty to protect a great citizen like you, and we will never forget

“May God rest your gentle soul .” He wrote.