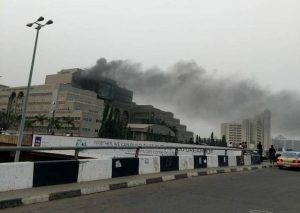 An early morning fire on Wednesday razed parts of a building at the Federal Ministry of Finance in Abuja, the Federal Capital Territory (FCT).

It is not clear if the fire incident affected the main building of the Federal Ministry of Finance.

At the time of filing this report, the fire was still raging with no men of the federal fire service on ground.

An eyewitness said: “Ministry Of Finance on fire. Called 112. They confirmed getting lots of calls confirming that the fire is on. I was told men of the FCT and Federal Fire Service will be there soon”.