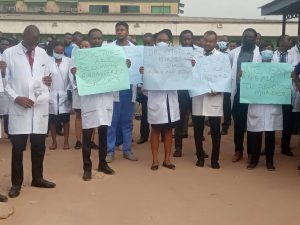 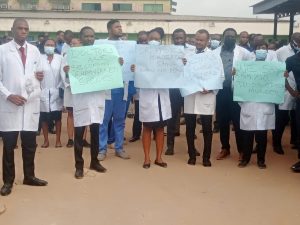 Activities at the University of Benin Teaching Hospital (UBTH) were temporarily disrupted on Tuesday morning as members of the Association of Resident Doctors (NARD) protested the killing of their member identified as Dr Otote Osaikhuomwan aged 36.

Osaikhuomwan was reportedly killed in the compound he stayed in the Ugbor area of Benin City in the presence of his pregnant wife in the early hours of Monday. The killers were said to have gone straight into his apartment and shot him in the chest area before going away with some items. He was of the Department of Ophthalmology.

President of the ARD, Dr Elamah Ikpemimoghena who broke down in tears said insecurity has been one of the reasons responsible for brain drain.

He said “This is a very unfortunate incident, it came to us as a rude shock and it boils down to the general insecurity in the state and in the country at large. Something that we have always complained about, something that has made a lot of our colleagues reconsider their stance in working in Nigeria. Insecurity is gaining a very scary trend and that has led to a lot of brain drain, a lot of our members have left the country just because of insecurity. We call on the relevant authorities to ensure that they bring the perpetrators to book and give justice to our friend, our brother, a hardworking, calm fellow. Somebody that we know cannot hurt a fly, we don’t know why this happened to him but we hope that God will grant the family, the department and everyone here in UBTH and NARD the fortitude to bear this irreparable loss.”

On his part, the spokesperson of ARD, UBTH, Dr Era Eugene urged security agencies not to ignore the possibility of assassination in their investigation because “What is of particular concern to us in respect of this incident is we are concerned about the nature of the incident, information available to us suggest that his apartment was the only apartment robbed in the compound and why it is worrisome is it looked more like a targeted attack we are having concerns about that and it is our opinion that the security operatives rise up to the occasion.”

The Edo State Police Public Relations Officer, Bello Kontongs (SP) confirmed the killing and said the Division where the incident happened has commenced preliminary investigation and would transfer their findings to the State Command.

Man Hires Neighbor To Get Wife Pregnant, Takes Him To Court For Failing To Impregnate Her After 75 Attempts

Woman delivered of a baby after six-year pregnancy, says It’s a miracle [VIDEO]