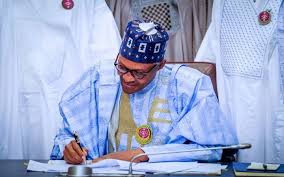 The ruling All Progressives Congress, APC, has settled for a shift in date of its national convention following President Muhammadu Buhari’s approval.

It was gathered Sunday night that the Caretaker Extraordinary Convention Planning Committee, CECPC, chaired by the Yobe State Governor, Mai Bala Buni, met and took a decision to postpone the party’s national convention, which was earlier scheduled to hold this Saturday.

The committee decided on a two-week shift, a development that may not have gone down well with other stakeholders of the party, most of whom are agitating that the convention should hold on February 26 as earlier scheduled.

There are also indications that stakeholders settled for a postponement owing to logistic gaps in the convention planning.