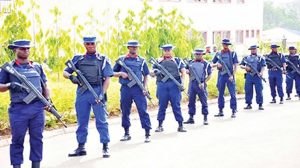 The Edo State Command of the Nigerian Security and Civil Defence Corps (NSCDC) on Monday said it has arrested 11 illegal migrants from Niger Republic and 10 suspected kidnappers.

The Edo state Commandant of NSCDC, Mr Aniekan Udoeyop said that the suspects were arrested along the Ekpoma-Auchi road, based on intelligence and distress call from the area.

Addressing journalists at the Command headquarter in Benin City, Udoeyop said that on February 11, the “Edo NSCDC command received a distressed call about the suspicious movement of some persons along the Ekpoma-Auchi express road” and that he promptly directed his personnel to swing into action, and in the process, the suspects were arrested.

He said that investigations were still ongoing and that the illegal migrants would returned to their country.

He said “We will liase with relevant security agencies and see how they can be returned back to their country.

“We also arrested three of the main culprits who brought them in under the guise of giving them lucrative jobs.

“I will therefore advice parents to be cautious of whom they give their children out to.

“Some of these lucrative jobs these human traffickers promise are actually not there, and it’s just their ploy to modernize slavery”, he said.

He said that the three suspected human traffickers would face the full weight of the law.

On the suspected kidnappers, the commandant said that they were arrested with exhibits including charms, machetes and other dangerous weapons adding that the suspects also tried to utilise their charms on the personnel of the corps, but unluckily for them, their charms failed.

Understanding the Mystery of Process, By: Douglas Ogbankwa Esq.