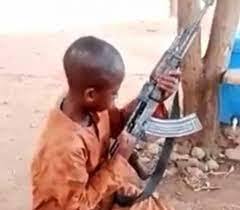 Sani Suleiman, a 14-year-old bandit has been arrested by operatives of the Zamfara State Command of the Nigeria Security and Civil Defence Corps (NSCDC).

The teenager is said to be one of the foot soldiers of a bandit kingpin, Bello Turji and a rapist.

This was made known by the State commandant, A.A. Sparks who addressed journalists on Wednesday.

According to him, Suleiman was arrested in Kadage village, in Moriki Emirate, Zurmi Local Government Area.

Sparks noted that from investigation, it was discovered that the teenager was trained in the use of weapons by one Salihu Gang at Sububu forest.

He said the boy confessed that he participated in cattle rustling and kidnapping activities.

“Salihu Gang is said to be a foot soldier of a notorious armed bandit known as (Bello) Turji that has been terrorising the entire northwest zone,” Sparks said.

According to him, the boy confessed that he had been raping women brought to their camps.

Similarly, the corps arrested 10 illegal miners at Matuzgi village, in the Talata-Mafara Local Government Area of the state.

The arrested miners are suspected to be bandits operating in the state.

“The men of the corps raided the illegal mining site in the early hours of Wednesday, 9th February, 2022, where about 9 bags of raw precious stones were confiscated by the corps special strike force and brought to the command,” he said.

He listed shovels, diggers and hammers as some of the exhibits recovered from the site