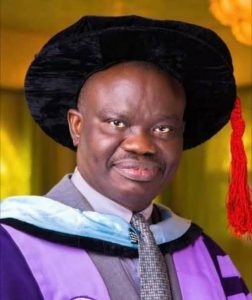 The sacked Acting Vice-Chancellor of Ambrose University was said to have been removed from office owing to a number of sins for which his hirers who appointed him on a vengeful mission did not see the results.

The crime of Ambrose Alli University ASUU chapter is their demand for their sixteen (16) months salary and other allowances which the State Government has adamantly refused to pay.

One of his major undoings according to sources was his refusal to comply with the instructions to resign his appointment following his refusal to reduce the institution’s staff strength by half, increase school fees to the level of paying staff emoluments without govt subvention, allow the Special Intervention Team (SIT) free hand in the day to day management of the university.

His other sins are his refusal to get confrontational with the Academic Staff Union of the University (ASUU) on resuming as Acting Vice-Chancellor, appointment of ASUU kingpins as directors of Strategic components of the university, allowed ASUU to defeat the government in the court over the vexed issue of staff biometrics conducted by the Edo State Government house ICT personnel.

It was gathered that a member of the previous Council who allegedly made fortune under the former Vice-Chancellor, Prof Ignatius Onimawo and currently a member of the newly constituted SIT has been up in arms against the ousted Vice-Chancellor for refusing to employ his boys as the university staffers or open the treasury for him to loot.

Efforts to have the comments of Prof Benson Osadolor prove abortive as at the time of filling this report.