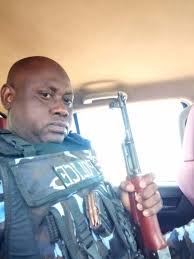 Barely 24 hours after terrorists attacked Bakori-Funtua axis in Katsina, the daredevils have struck again, this time in Magama, Jibia Local Government Area, killing the Divisional Police Officer of the area, DSP Abdulkadir Rano, a soldier and one other visiting Almajiri who recently arrived in the community.

The terrorrists were also said to have robbed one Alhaji Haliru of N2 million and abducted his wife in the course of the operation.

“The incident happened right at my doorstep. My neighbour notified me of the development about 2:10 am early hours of Wednesday. After a while, I could also hear gunshots. Then a little later, we kept hearing sounds of cars and motorcycles roaming the streets. We realized that they were using the vehicles to plant their men all over the area in case of a reprisal from security agents manning the area.

“The terrorrists knocked at my door few times and left, did same at my next door neighbour but God saved us as they left without forcing themselves into our residents.
However, they broke into Alhaji Haliru’s home, (aka ‘mai baki mai’) and went away with his wife, Asiya and N2 million when they could not find him.

“I notified the police and they arrived immediately at the scene of the distress call but unfortunately, on citing DPO Abdulkadiri Rano, the hoodlums opened fire on him while trying to alight from his vehicle and killed him in the process. They also killed one soldier and injured Lt. Masoyi, who is currently receiving treatment at the Katsina Federal Medical Centre. One visiting Almajiri who just arrived the village recently was also killed in the attack.”

However, the village head said the community is calm now as the situation has been brought under control by the security agents.

Efforts to speak with SP Gambo Isah, the Police Public Relations Officer in the state failed but he confirmed the attack on his official WhatsApp page, sharing the photo of the late Jibia DPO, DSP Rano, praying for his soul to rest in peace.

Similarly, the Acting Director Army Public Relations, Katsina 17 Brigade, Lieutenant Sinivie Tamuno could not be reached to confirm the identity of the affected soldiers in the attack as at the time of publishing this report