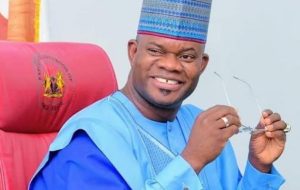 Members of the state Houses of Assembly across the coun­try on the platform of the APC on Monday endorsed Kogi State governor, Yahaya Bello, for President in 2023.

The endorsement was contained in a communiqué issued after the extraordi­nary meeting of the forum of APC State Legislators of the Federation held in Abuja on Monday.

The 365 legislators who attended the programme across the country also passed a vote of confidence in President Muhammadu Buhari for his sterling per­formance and cohesive lead­ership qualities.

Similarly, the lawmakers passed a vote of confidence in the Governor Mai Mala Buni-led Caretaker Extraordinary Convention Planning Com­mittee for positively reposi­tioning the party and for his purposeful leadership that has attracted people of good­will to the ruling party.

Explaining why they threw their support behind the presidential bid of Yaha­ya Bello, the forum of APC legislators described the Kogi governor as a young perform­er who has the interest of the country at heart.

The lawmakers have also decided to embark on mobili­sation of support for Bello’s as­piration in their various states.

“We, the State Assembly Legislators of the Federation pass a vote of confidence in the President of Nigeria, Pres­ident Muhammadu Buhari (GFCR), for his sterling and cohesive leadership of Nige­ria through thick and thin and urge him to be relentless in ensuring that he leaves Ni­geria in 2023 a better place.

“We pass a vote of con­fidence in the Governor Mai Mala Buni Caretaker Extraordinary Convention Planning Committee for its positive aggressive reposi­tioning of our great party, the All Progressives Con­gress, and thank the com­mittee for its purposeful leadership, which has at­tracted men and women of goodwill into the party. We, the members, further urge the committee to do more.

“The State Assembly Leg­islators of the Federation endorses and states their unalloyed and unshaken support for the aspiration of the young and ebullient gov­ernor of Kogi State, Yahaya Adoza Bello, who has against all odds decided to take the bull by the horn, by aspiring to the office of the President of Nigeria come 2023.

“The members thank him for leading the clarion call for the presidency of Nigeria and urge him to have no fear or doubt in his race for the exalted office as members of the Nigeria State Legislatures are solid­ly behind him.

“National, zonal and states’ coordinators were in­augurated to continue to mo­bilise honourable members from their various states to ensure the victory of Gover­nor Yahaya Bello’s presiden­tial aspiration come 2023,” the communiqué read.

Sultan Rejects Marriage To 14-Year Old Virgin, Says She Is Still A Minor, Offers To Take Her To School