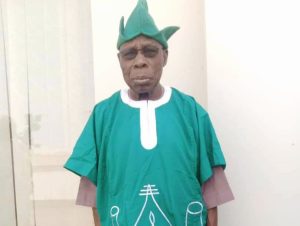 The retired General hosted the leadership of the organization in Abeokuta, capital of Ogun State.

Speaking, Jacobs sympathized with Obasanjo over the arson at his 2,420 hectares farm in Benue State.

The popular group also thanked the former leader for accepting the position of EGP bestowed on him.

In his remark, Obasanjo expressed appreciation for Kegites’ participation in his 2021 birthday celebration.

The host invited the guests to his 85th birthday on March 5 and promised to cater for a number of their members.

Obasanjo recommended a discourse on moral decadence among the youth demography in Nigeria.

“Baba approved the invitation of Ooni of Ìfẹ to this year’s birthday. He promised to invite his friends and associates”, Jacobs disclosed.

“Baba reiterated the need for lecture on that day focusing on our culture and values; Baba demanded for the update of club registration fracas.”

2023: Why I Am Most Qualified To Become Next President – Doyin Okupe