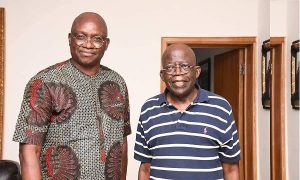 A former Governor of Ekiti State, Ayodele Fayose in a newly released video has reiterated his stand about the 2023 presidential election.

Fayose said his being in the Peoples Democratic Party does not stop him from supporting the candidacy of the All Progressives Congress leader, Asiwaju Bola Tinubu in the upcoming General elections.

Fayose further said he can’t campaign against Tinubu and promised to give him all his support because it is time for the Yorubas to take up the mantle of leadership in Nigeria.

I Can Never Return To Your Party, Obasanjo Tells PDP Leaders