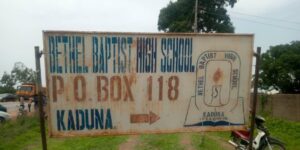 President Kaduna Baptist Conference and Proprietor of Bethel Baptist High school, Kaduna Rev. Yahaya Jangado disclosed this to newsmen on Tuesday evening after a meeting of the management and parents of the abducted students.

Rev Jangado said though the bandits called and allowed the school management to speak with few of the abductees, they were yet to demand for ransom.

He said on Monday morning they received a distress call bandits invaded the school and on hearing the news they alerted security agencies to come to their rescue and they responded.

“They came and already the bandits were going away with a number of our students and they was an exchange of fire between the soldiers and the bandits and in the process we lost two of the soldiers.

“For now, we know that we have 154 students in the school hostel and yesterday (Monday) after the exchange of fire between the soldiers and the bandits.

“We came to the school and recovered 28 students, some of them hid in many places. Some of them in the course of taking them away, they escaped and they came back to the school.

“So the total number of students we recovered yesterday (Monday) were 28 and today (Tuesday) by the grace of God we had a call from the bandits and they assured us that our children are well and doing okay. In fact we had the privilege of speaking with few of them.