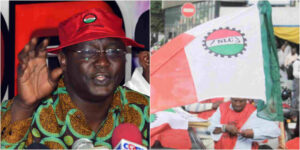 of Public Enterprises (BPE) in the process.

The President of NLC, Comrade Ayuba Wabba, said the BPE had become synonymous with an unending swindle of the people of Nigeria.

“The Nigeria Labour Congress (NLC) has learnt with great consternation a surreptitious plan to sell the Transmission Company of Nigeria (TCN),” Comrade Wabba said, adding that neither the congress nor the sectoral affiliate union was officially contacted or even informally consulted on the alleged plan.

“Therefore, Congress advises that if the report was planted and so, designed to fly a kite, the paper kite is riddled with holes, sodden, clumsy and torn in different places. In a word, this kite cannot fly,” the NLC President added.

He pointed out that Nigerian workers and people were vehemently opposed to this plot, warning that they would resist the grand larceny.

Wabba said: “Congress condemns with vigour the continued balkanization, stripping and stealing of Nigeria’s economic assets. The current attempt to hand over the Transmission Company of Nigeria to a few ‘privileged’ Nigerians is self-serving, obtuse, odious, morally reprehensible and criminal. Nigerian workers and people are vehemently opposed to this plot and will resist this grand larceny.”

According to him, the TCN is a strategic economic asset of immense national security implications, because it traverses all the nooks and crannies of Nigeria.

The NLC President warned that the planned sale of the TCN was only an attempt to further confound the people and concurrently, raise electricity tariff, warning that Nigerians have had enough.

Wabba said: “We urge the Nigerian people to make no mistake about the plot to sell TCN as it would only result in the continuation of the regrettable policy of heaping an unbearable burden on the ordinary people. The plan would also fundamentally weaken the security of the nation and above all, deprive the people of their age-old investment in the commanding heights of the Nigerian economy.

“In sum, Congress reiterates that it is faulty to contemplate selling the TCN; it is an obvious misdirected and insupportable policy. This clandestine plot is like the kite squeaking in the dark with broken wings; it will simply not fly.”