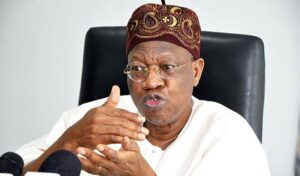 The federal government says it spends a whooping sum of N60 billion yearly to repair and maintain the vandalized oil pipelines across the country.

It also revealed that the country loses an average of 200,000 barrels per day to the wanton damage to pipelines and other oil and gas facilities.

The minister of Information and Culture, Alh. Lai Mohammed disclosed this at the Townhall meeting on protecting oil and gas infrastructure in Abuja on Monday.

He noted that the town hall meeting was very important, considering that the destruction of the infrastructure has socioeconomic and environmental implications on the government and the host communities, considering the fact that oil provides 80 per cent of Nigeria’s budgetary revenues and 95 per cent of foreign exchange earnings.

‘‘with oil providing 80 per cent of Nigeria’s budgetary revenues and 95 per cent of foreign exchange earnings, one can only imagine the impact of the incessant destruction of oil pipelines on the economy.

‘‘Between January 2019 and September 2020, 1,161 pipeline points across the country were vandalized.

‘‘Apart from the impact on the nation’s earnings, consider also the environmental problems caused by the incessant vandalism, in terms of freshwater pollution, air pollution, soil pollution, etc., and you will appreciate the enormity of the problem.’’

According to the minister, the town hall meetings is focusing on: creating in the public mind that government property are indeed citizens’ property and so must be protected for the benefit of all sensitised communities, especially those where infrastructure are located, to be conscious of the import of such and protect them and to expose, arrest and prosecute all those who engage in buying pilfered infrastructure items along with those who bring such to them to sell.

It is also aimed at sensitizing the larger citizenry to support the widespread campaign on the protection and ownership of public infrastructure/assets, especially in the Railways, Roads and Aviation sectors.

While underscoring the need to protect public infrastructure, Mohammed further stated that this administration has embarked on massive investment in infrastructure since coming into office, despite dwindling resources.

‘‘Please remember that public infrastructure is at the very core of economic growth and national development. Therefore, the destruction of public infrastructure by some unpatriotic Nigerians calls for great concern and immediate action, hence our decision to organize this town hall meeting series.’’

In his presentation, the Group Managing Director of NNPC, Mele Kyari said the Corporation lost about N51.207 billion between 2019 to May 2021.

He called on citizens to take the Pipelines as critical national assets and report activities of suspected vandals to relevant authorities.

He equally called on community leaders to ensure the Pipeline right-of-way is not encroached to avoid unfortunate incidences of fire outbreaks.

In his own remarks, the minister of Niger Delta, Sen. Godswill Akpabio said vandalization of oil installations pose a greater danger to the Niger Delta region considering findings of recent research.

Quoting the research conducted on the impact of pipeline vandalism in the oil region, Akpabio said about 16,000 young people between the ages of 1-15 die yearly as a result of the vandalism.

While calling for urgent action to stem the tide, the minister called for a thorough investigation and sanctions for the perpetrators of the vice, alluding that some vandals could be the beneficiaries of the n60 billion allocations for pipeline repairs.

The meeting was the second in a three-town hall meeting series that started in Abuja on June 7th 2021 to address the vandalism of public infrastructure in the country.

The first in the series of town hall meetings on protecting public infrastructure was held on 7th June 2021 and was focused on the vandalism of railway tracks, roads, bridges as well as the removal of manhole coverings and destruction of power infrastructure, among others.