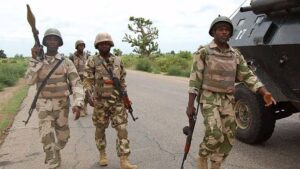 The Nigerian Army says its troops operating along Mokwa-Jebba road, intercepted and arrested a fleeing bandit in a vehicle traveling from Zuru to Ibadan during a stop and search operation on Sunday.

The Director, Army Public Relations, Brig.-Gen. Onyema Nwachukwu, said this in a statement on Tuesday in Abuja.

Nwachukwu said the vigilant troops spotted an occupant of the vehicle, who claimed to be Sgt. Aminu Sule.

He said the suspect was found to be in possession of a pair of camouflage, military boots, knife and substance suspected to be charms.

He said on further interrogation, the suspect confessed to be traveling to Ogbomosho in Oyo State, and further claimed that the uniform and boots belonged to his brother who was a soldier.

He added that the suspect was discovered to be fleeing from the ongoing operations in Niger State to a safe haven.

Lekki Tollgate Shooting: Why we switched off our billboard – Firm