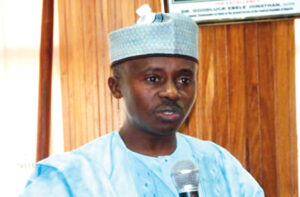 For nearly a decade, the trial of Farouk Lawan, a former House of Representatives chairman of the ad-hoc committee investigating the fraud around the oil subsidy, lingered at the Federal Capital Territory (FCT) High Court in Abuja.

Mr Lawan is standing trial on charges of demanding $3 million bribe from billionaire businessman, Femi Otedola, to remove his companies from the list of firms indicted in the probe conducted by the House of Representatives’ committee.

It was alleged that Mr Lawan received $500,000 out of the $3million he demanded from the businessman.

The trial judge, Angela Otaluka, had slated today, Tuesday, for judgment on the matter, after the court failed to deliver the verdict last week.

According to hearing notice in respect of the suit, the judgement was fixed for 10.a.m. on Tuesday.

Our correspondent, who arrived the FCT High Court at Apo at 9:15 a.m., observed that the defendant, Mr Lawan, was not in court.

When Ms Otaluka commenced the day’s proceedings at 9:30 a.m, she informed lawyers and litigants that the court was going to start with the hearing of civil cases, a development that is at odds with the usual practice of judges taking judgements and rulings first.

The judge inquired from court registrars as she took her seat why the defendant and counsel in the matter were not in court.

No tangible response was heard from the court officials.