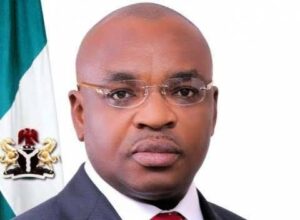 The student, Iniobong Ekpo, was in his final year at the Department of Agricultural Engineering when he was expelled for publishing a “derogatory and defamatory article” in 2019 on Facebook against the Akwa Ibom State Governor, Udom Emmanuel.

He was first suspended indefinitely from studies before his expulsion two months ago.

Mr Ekpo used a pseudonym, Afrosix Jaara, to write the article in which he accused Mr Emmanuel of reneging on a promise he allegedly made in 2017 to give financial reward to the then graduating students of the university.

“It’s 2 years and 166 days since he promised, yet none of the graduands received a naira even the first class graduands were unattended to when they went to his office,” Mr Ekpo wrote in the Facebook post, adding that Mr Emmanuel may have “scammed” the students.

The governor by virtue of his office is the ‘Visitor’ to the university which is owned by the Akwa Ibom State Government.

The university, in the expulsion letter, said Mr Ekpo’s article was a “breach” of the matriculation oath and a violation of the university rules and regulations enshrined in the Student Information Handbook.

The university said the student had appeared before a disciplinary committee.