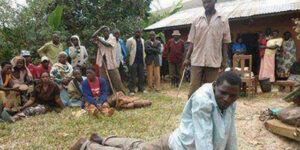 An Upper Shari’a Court sitting in Kano, on Thursday ordered that six men be given 20 strokes of the cane each for stealing eight cell phones.

The Presiding Judge, Ibrahim Sarki-Yola, also sentenced the six convicts to six months imprisonment each without option of fine.

“This will serve as a deterrent to other culprits who are terrorising the public,” he held.

Earlier, the Prosecution Counsel, Ali Kabara, told the court that the convicts committed the offence on June 12 in Kano Metropolis.

”On Democracy Day celebration, the convicts armed themselves with dangerous weapons, attacked and extorted eight phones from some members of the public.

“The eight stolen phones were found in their possession,” he said.

The offence, he said, contravened the provisions of sections 97 and 292 of the Penal Code.