Why we killed Shekau — ISWAP 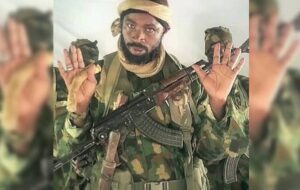 In an internal message from ISWAP leader, Abu Musab Albarnawi, whose recording was obtained by HumAngle on Friday, said Mr Shekau blew himself up after refusing to surrender, following the invasion of his hideout on May 19, 2021.

The ISWAP said the interim leader of the Islamic State of Iraq and Syria, ISIS, ordered them to take action on Mr Shekau for deviating and killing “believers”.

Mr Al-Barnawi described Mr Shekau as “the leader of disobedience and corruption.”

According to him, Mr Shekau, who took over after the death of Boko Haram founder Mohammed Yusuf in 2009, was apprehended “in the most humiliating manner.”

“When it was time, Allah set out brave soldiers after receiving orders from Amirul Muminin [leader of the believers],” he said.

He initially escaped and roamed the bushes of Sambisa for five days, where he suffered seriously.

However, ISWAP fighters were able to locate him. Still, Abu Musab narrated, Shekau managed to run away a second time but was chased down.

The rival fighters urged him and his followers to repent, assuring him that if the ISIS leader decided to make him their leader after he had surrendered, they would have no choice but to obey.