US to ISWAP fighters: You’re not eligible for the $7million bounty on Shekau 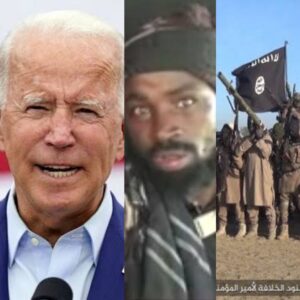 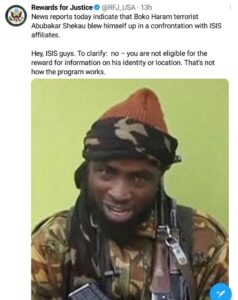 The United State Department has told the Islamic State in West African fighters that they are not eligible for the $7 million bounty that was placed on Abubakar Shekau.

Recall that the US Department of State designated Abubakar Shekau as Specially Designated Global Terrorist under Executive Order 13224 in June 21, 2012.

A year after this, the US Department placed a $7 million (over N2.8 billion) bounty for information on his identity and location.

Yesterday, it was reported that the Boko Haram leader, Abubakar Shekau blew himself up after being overpowered by ISWAP in Sambisa Forest. The US State Department said that ISWAP is not eligible because they are ISIS Affiiates.

“News reports today indicate that Boko Haram terrorist Abubakar Shekau blew himself up in a confrontation with ISIS affiliates. Hey, ISIS guys. To clarify: no – you are not eligible for the reward for information on his identity or location. That’s not how the program works,“ the US tweeted.

I did not author any Petition against the Esama of Benin of Kingdom,Chief Gabriel Osawaru Igbinedion CON — Douglas Ogbankwa Esq.