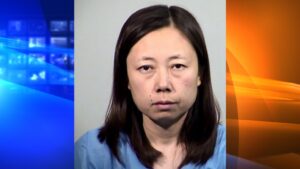 An Arizona mother killed her 9-year-old daughter and 7-year-old son Saturday morning and told police she heard voices telling her to do it, according to the police.

Yui Inoue, 40, was charged with two counts of first-degree murder according to a report by the Arizona Republic.

Tempe police said Inoue flagged down an officer near her home in the southeast Phoenix suburb of Tempe around 7 a.m. Saturday. She told the police she was hearing voices telling her to kill her children.

Police said they had been called to the same apartment earlier Saturday morning because of a domestic dispute involving a husband and wife.

Tempe Police spokesman, Sgt. Steven Carbajal said, the couple was separated, and no one was arrested. The children were safe in bed at the time, and there was no apparent reason to call child welfare authorities.

It didn’t seem like there was an immediate threat to the children. Parents, couples, argue and they have disagreements, and they have issues that come up that often don’t require that type of intervention.

Carbajal said officers were doing what they could to support the father. In an interview, Carjabal said:

It’s just so unfortunate that a 9- and 7-year old that rely on their parents, especially their mother, to really care for them could have been involved in something this tragic.

The officers who found the children were also receiving counseling.

A lot of the officers on that call have children, and even the ones that don’t, we see a lot of tragedy over the course of our career. But you can’t prepare yourself for something like that. The aftermath is really one of the hardest things to deal with.

Officers found the kids dead from physical trauma inside the apartment Inoue shared with her husband, and immediately detained her.

The officers who discovered the dead children were not the same ones who were at the apartment just after midnight on the domestic dispute call. The father was not at the apartment when officers returned to find the children.