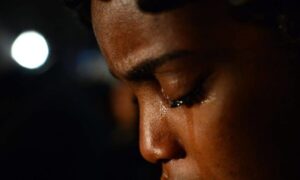 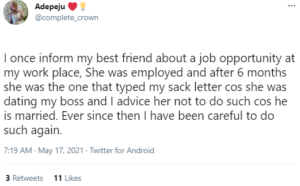 In a tale of friendship gone sour, a Nigerian lady has narrated how a friend she helped secure a job betrayed her.

According to the lady, identified as Adepeju, @complete_crown by her Twitter handle, there was a job opening where she was working, as a good person, she informed her then jobless friend about the vacancy.

Her friend, whose identity she didn’t disclose, applied and was given the job.

In a twist of events, however, she was sacked barely six months after her friend was employed.

According to Adepeju, she had advised her friend against having an affair with their boss who was married but got the shock of her life when the same friend typed her sack letter.

“I once inform my best friend about a job opportunity at my work place, She was employed and after 6 months she was the one that typed my sack letter cos she was dating my boss and I advise her not to do such cos he is married. Ever since then I have been careful to do such again.”

Drogba, two others die, many injured as hoodlums clash in Ikorodu