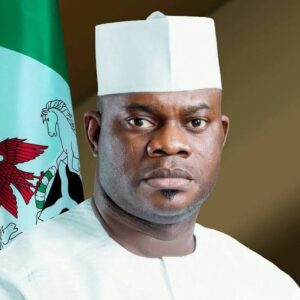 The Governor of Kogi State, Yahaya Bello has been knocked by Nigerians over his desire to run for Nigerian president in 2023.

Bello, during an interview on Friday, declared that he will not disappoint “all Nigerians” who want him to run for president.

His statement, however, did not go down well with most Nigerians as they took to social media to slam the governor.

Reacting to the statement, @SA_Emmanuel tweeted, “Nobody is asking you to run for presidency please. Enough of all these talks; no Nigerian will ever vote for you.”

A Twitter user with the handle, @Eziamaka1 wondered which Nigerians the governor was referring to.

“The first day I read this statement from Bello, I have been wondering about the Nigerians asking him to run for Presidency. I detest people like this. If you want to do something you aspire about, do it and stop acting like you were cajoled to do it,” she tweeted.

Daniel Igili with the handle @danieligili tweeted about Bello’s present administration, “Yahaya Bello that can not rule Kogi State is here talking about Nigeria. May God never allow another king Pharaoh to rule over us again.”

Theophilus Abula also tweeted,” Bello Yahaya should first of all build schools for the children of Kogi state where he’s governor.

“Most children in Kogi State are vulnerable to studying under the tree. Charity begins at home. If he can’t fix schools for his people in his State, how can he govern Nigeria?, ” Abula questioned.

“Wake up from your bad dream. We don’t want a president that cannot build a simple bridge,” Akin Akinbodunse slammed the governor.

@yorilawal believes that the governor is joking, “Our politicians are so funny. They think we don’t have sense.”

@voiceofafoo tweeted, “This is laughable.
These Nigerian politicians don’t have shame at all.”

Kayode Esan on Twitter believes that, “this is what happens when a nation’s governance system runs on a dysfunctional template. Triumph of mediocrity!”

JUST IN: Arrested Bandits’ Informant Sets Self Ablaze In Zamfara