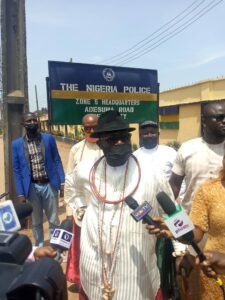 The embattled Prime Minister of Warri, the Ologbotsere of Warri Kingdom, Chief Ayiri Emani and other Chief were quizzed for over 2 hours on allegations bothering on Kingship crisis, invasion of Olu Palace which heightened tension in Warri Kingdom.

Ayiri arrived the Nigerian Police . Zone “5” on the strength of a letter of invitation with (reference No. CR3000/2N.5/X/AV/Vol/83/41 dated Wednesday 21st April,2021), said: “the office is investigating a case reported through a written petition to the Assistant Inspector-General of Police, Zone “5” Headquarters in Benin City.”

The letter addressed is entitled “Police Invitation Letter. Re-case of Burglary, Stealing and Conduct Likely To Cause Breach Of Peace.”

The suspended Itsekiri chief who is opposed to the emergence of Prince Tsola Emiko, as the Olu of Warri designate said he has nothing personal against Prince Emiko describing him as his brother and friend.

“I was actually invited based on the invasion of Olu’s palace which I told the police I have nothing to do with it because I was not in town when the incident happened”.

On his opposition to the new Olu designate said ” As a person, I cannot say iam not in support of the Olu’s designate, we have laid down procedure. It has nothing to do with me. The Olu designate is my brother and a friend, we have no personal issue”.

“It is not that iam not in support of whatever they are doing. I have told the police and they have questioned me on what led to the invitation. Other issue I keep to myself”.

“The police want to know who invaded the palace because some things were missing and they want to know the where about of the things.

He however said talks are in progress to bring about final peace to the Kingdom.