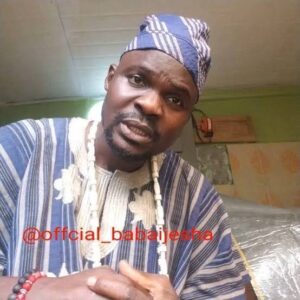 Nollywood actor, Olanrewaju James aka Baba Ijesha, has been arrested by the Lagos State Police for allegedly defiling a minor.

The case was transferred to the gender unit of the state CID, Panti, Yaba for proper investigation.

The statement also alleged based on preliminary findings, the actor, who is popular for his roles in many Yoruba film, started assaulting the victim sexually when she was seven years old.

It was further alleged the actor was also captured on CCTV camera allegedly assaulting the victim, now 14-year-old.

The Police also said Baba Ijesha confessed to the crime while the Commissioner of Police, Lagos State, CP Hakeem Odumosu, has ordered for proper investigation as he promised to do justice in the matter.

Baba Ijesha is a popular actor, who also doubles as a producer.

He has featured in over 200 films and some television series.

The Dictatorship In Edo, By Ebun-Olu Adegboruwa, SAN