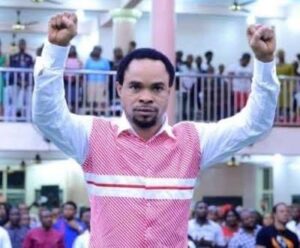 Popular Onitsha-based cleric and self-acclaimed lion, Prophet Chukwuemeka Odumeje, who opened up on how he acquired his spiritual powers has also revealed how he got the gift of singing.

According to the controversial pastor, he started singing in his mother’s womb.

“I started singing in my mother’s womb,” he said.

He added: “What I possess is a full calling. Everything was given to me so that nobody can brag for me.

“When I’m on the pulpit, I sing the songs that can move me into action. I don’t need anybody to sing for me.”

Odumeje, who has released many songs in recent times, said singing moves him into action.

So also is his highlife-christened track, ‘Great is My God’, featuring Phyno.

According to him, he writes his songs, and most times, prays to God to give me an inspiration for a special song that will move mountains.

Odumeje said his mission on earth is to make people know that Jesus will do everything for them.

Speaking in Igbo, the self-acclaimed lion, said Odumeje means Jesus is my leader.

“It is just like saying Jesus is the one leading me. As they call Gozie Okeke, ‘Akanchawa.’ Gozie is not ‘Akanchawa’ but Jesus is.”

“That’s what my music is all about. My music is designed to make people know everything about Jesus,” said the cleric who is more popular among celebrities.