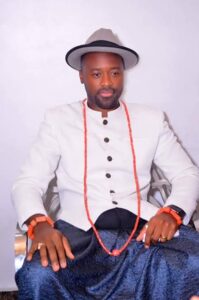 Prince Harrison Oritsemone Jalla has pledged his unalloyed loyalty to Olu-designate, Omoba Tsola Emiko, just as he urged Itsekiri sons and daughters to disregard media reports concerning him relating to the Oluship.

Prince Jella, in a statement he personally signed and made available to newsmen, said his legal action concerning the Oluship was based on the contention that the throne was not exclusively preserved for the Emiko’s linage and that his position has not change.

While state stating that his action was largely misconstrued by the media and that his legal action predates the selection of the Olu-designate, Prince Jella said, “I stand for the liberation of Iwere kingdom from the hands of brigands who held the kingdom hostage for the past five years for their personal interest and salute the courage of the Ginuwa ruling house for timeously checking their excesses.”

Prince Jalla who vowed that he will not watch from the sidelines on matters concerning the Iwere kingdom, declared that, “Olu-designate Omoba Tsola Emiko is on a mission to completely transform the Iwere kingdom.”