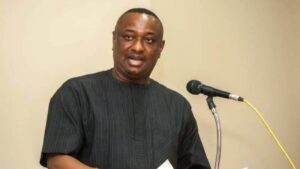 Participants in the Federal Government’s Special Public Works (SPW) programme are protesting the delay in paying their stipend more than three months after kick off.

The SPW is an adhoc programme designed by the government to provide stop-gap three months jobs to mainly artisans to ean N20,000 monthly doing public works.

One thousand youths were hired from each of the 774 local government in the country as beneficiaries, bringing the figure to 774,000 councils.

The programme was inaugurated on January 5. The first batch of beneficiaries have completed their assignment without being paid.

President Muhammadu Buhari on March 20 directed the release of funds to pay the stipends.

Minister of Labour and Employment Festus Keyamo (SAN) hours after, directed the National Directorate of Employment (NDE), the Federal Government agency driving the programme, to start processing the payment plan.

Keyamo, in his official Tweeter handle, (@fkeyamo, assured the participants that they would soon receive alerts of payment.

Twenty two days after, no payment has been made.

Some of the participants at the weekend took to Keyamo’s twitter handle to ventilate their frustration.

One of them described the Federal Government as “heartless” for failing to pay them their stipend.

Abdoul Baqee tweeted: “People are hungry regarding the payment of stipends. Please fast track the payment of these people. 774, 000 people waiting anxiously for their payment with hunger and they don’t even have phone to come to your timeline. When you get hungry just remember those people that work with hunger without their entitlement.”

Yusuf Mohammed Olawuyi asked: “Mr. Honourable minister, what happened to our SPW stipends? You already published that we will start receiving alert from the beginning of April.”

Fikpo said: “We are still in the process; we have identified some loopholes here and there. We want to verify the BVN of the participants. That is why we are working with the banks.

“We are verifying the BVN of those participants in order to avoid double payments to several people or to three or more accounts.”