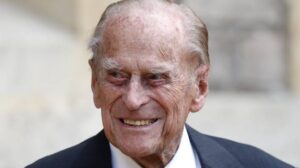 Prince Philip, the Duke of Edinburgh, husband of Queen Elizabeth II, father of Prince Charles and patriarch of a turbulent royal family that he sought to ensure would not be Britain’s last, died on Friday at Windsor Castle in England. He was 99.

His death was announced by Buckingham Palace, which said he passed away peacefully.

Philip had been hospitalized several times in recent years for various ailments, most recently in February, the palace said. The queen and Prince Philip received their first doses of the coronavirus vaccine in January.

He died just as Buckingham Palace was again in turmoil, this time over Oprah Winfrey’s explosive televised interview with Philip’s grandson Prince Harry and Harry’s biracial wife, Meghan, on March 7, when the couple, in self-imposed exile in California, lodged accusations of racism and cruelty against members of the royal family.

As “the first gentleman in the land,” Philip tried to shepherd into the 20th century a monarchy encrusted with the trappings of the 19th. But as pageantry was upstaged by scandal, as regal weddings were followed by sensational divorces, his mission, as he saw it, changed. Now it was to help preserve the crown itself.

Ecstasy as first ever health centre is built in Kogi community