Ecstasy as first ever health centre is built in Kogi community 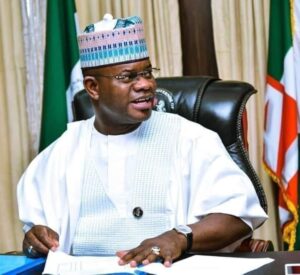 ITAKEDE-Ide, a remote community in Mopamuro Local Government Area of Kogi State has many things in abundance except a health facility to deal with its medical challenges

With a blessed and fertile land, the hard-working natives have food in surplus but whenever anyone falls sick, there is always a serious concern on how to deal with such without a functional health centre. Thus, to an average family, falling sick comes with great worries, as accessing health facilities is a problem.

Apart from a mission clinic, the only government dispensary in the community exists only in name. To make matters worse, the access road linking the community to Mopa, the council headquarters is in bad shape. During the rainy season, the community always shuns the route and turns to Aghara – Iluke Road, which is in another local government area of the state.

This explains why the residents could not hold back their joy when the Kogi State Commissioner for Information and Communication, Mr. Kingsley Fanwo, built and donated a health centre for the community; a development that has given them a glimpse of hope for their health challenges.

Residents of Itakede-Ide which is about 20 kilometres to the LGA headquarters, have for years lived at the mercy of God whenever anyone fell ill. The village which is located in the interior of the council area, suffered years of neglect in health facilities despite producing sons and daughters who are doing well in their private endeavours and have held key political positions in time past. At the unveiling of the facility, the community trooped out in exhilaration to witness the new hospital that promises to change the health status of the people.

The Primary Health Centre, a brainchild of Commissioner for Information and Communication, Kingsley Fanwo, a native of the area, is built in honour of his late mother’s foundation, Titilayo Fanwo Foundation. The primary health facility has a waiting room, consulting room, examination room, male and female wards with capacity for three beds each. The centre also boasts of a weighing scale, cylinder, drip stands, photo-therapy machine, sterilising drum, thermometers, nebulizer and other medical equipment.

A representative of the community youth, Mr. Tunji Dambola, eulogised the Information Commissioner for donating the health centre, describing his contributions to the community as immense. Explaining his choice of building the Primary Health Centre, Fanwo, who had earlier graded the community road, said he was moved by the health challenges of the community, hence the premium he placed for the quick completion of the PHC.

An elated Fanwo said he was moved to establish the centre to alleviate the pain of members of the community who often had to endure long journeys to access medical treatment.

Fanwo said: “Last year I was about developing my parcel of land for a personal building when on a particular day; there was outcry in the community that a particular person was sick and needed oxygen. Before he could be rushed to the council headquarters in Mopa, which is about 20 kilometres from the community, the person had died.

“I resolved that day that such will not happen again in my community. Hence I set aside the idea of first building a house for myself to address the health challenges of the community. The result is what you are seeing today. This project is my way of giving back to the community that raised me. What you see today is the beginning of greater things from me to the community,” he said.

The representatives of the governor at the commissioning, Pharm. Jamiu Asuku, lauded the commissioner for the huge impact he had made especially in his many personal donations and contributions to the community. He said Fanwo had reawakened the spirit of community development in him, urging other political office holders to emulate the gestures.

“No commissioner in this administration has done any project singlehandedly like this for his community. It takes a man with a heart of gold to do this kind of project. I am taking this as a challenge to do same for my people and I urge others in the GYB cabinet to emulate Fanwo.” Though the Commissioner did not declare how much the health centre cost, the project has come as a relief to more than 200 households.

The residents, who celebrated with songs and dances, could not hide their joy for the commissioner easing their burden of health challenges. The traditional ruler of the community, the Oluse of Ide, Oba Philip Ebilakun eulogized the commissioner, said the project has brought hope to them.

He called on other spirited- individuals and corporate organizations to emulate him and come to the aid of the community in other aspects that could uplift their standard of living. He also urged the state government to permanently tackle the issues of road and electricity; which still serve as a challenge to the community.