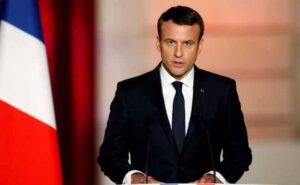 French President Emmanuel Macron announced on Wednesday that French schools would close next week and a limited lockdown in place in Paris and other regions would be extended to the whole country to battle soaring Covid-19 cases.

Macron said in an address to the nation that the current efforts to limit the virus “were too limited at a time when the epidemic is accelerating”. The spread of the so-called British variant meant “we risk losing control”.

He said that schools would close from Monday for the next three weeks, but this would include two weeks of spring holiday.

From Saturday night and for the next four weeks, travel restrictions will be imposed across the whole country and non-essential shops will close in line with measures already implemented in Covid-19 hotspots such as Paris, he said.

But striking a more optimistic tone for the medium term, he said some cultural venues and cafe terraces would reopen in mid-May “under strict rules” and a calendar drawn up for a progressive reopening of other facilities.

“Thanks to the vaccine, the way out of the crisis is emerging,” he said.

He also announced that the vaccine drive would be open to all those over 60 from April 16 and those over 50 from May 15.