Four state governors and three serving senators elected on the platform of the All Progressives Congress (APC) were, on Monday, prevented from travelling for the 12th edition of the Bola Ahmed Tinubu Colloquium holding in Kano State. 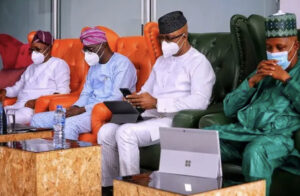 This was revealed by Chief Press Secretary to Lagos State governor, Gboyega Akosile, on Twitter on Monday morning.

The colloquium with the theme: “Our Common Bond, Our Common Wealth: The Imperative Of National Cohesion For Growth And Prosperity” forms part of activities billed to commemorate the 69th birthday of the national leader of the APC.