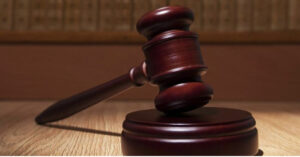 A 23-year-old man, Precious Azulule, who escaped from the Warri Custodial Centre, Delta State, during the #EndSARS protest, has been sentenced to 14 years’ imprisonment.

He said, “Precious Azubule, who escaped from the Warri Correctional Centre during #EndSARS protest on October 22, 2020, was sentenced to 14 years’ imprisonment.

“Azubulu was arrested by operatives on patrol and arraigned in Magistrate’s Court 4 with charge No. 46/c/2021 on two counts of conspiracy and escape from lawful custody. He was sentenced to seven years on each count, totalling 14 years’ imprisonment.”

Edafe, in a statement, said the police also arrested 31 criminal suspects, including a female cultist.

The PPRO said, “On March 13, 2021, we received information that a cult, called Aye Confraternity, would be having initiation of new members at Okpanam.  Immediately, the commander of the State Anti-Cult Unit mobilised men to a nearby bush at Obogba village, Okpanam, where the initiation was to take place.

“Fifteen male suspects and one female suspect were arrested; one Toyota Camry car was recovered. Investigation is in progress.”

The police spokesman, in the statement, also confirmed the lynching of a suspected armed robber by an irate mob at Mccaiver Road, Warri.

According to the PPRO, the police trailed a member of the gang, identified as Ola Tuoyo, 25, to a hospital where he was receiving treatment after surviving the mob attack.

He said the suspect, who suffered first degree burns, confessed to be a member of the robbery syndicate that invaded Mccaiver Road and gave the name of the deceased suspect as Idianmi.

Edafe said the suspect was being closely monitored at the hospital, though his chance of survival was slim.