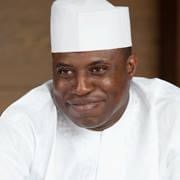 The meeting, which took place at the APC chairman’s residence in Abuja, lasted for about an hour.

Efforts to get any of the leaders to talk failed as the trio kept sealed lips but only took pictures.

He said: “The three leaders discussed on a wide range of political issues including the movement of the former Speaker and his supporters into the party.

“It is evident that APC’s opportunities in Ogun state is growing and widening.”

Reacting to the development, National Chairman of ADP, Engr. Yabagi Sani, said the party was not disappointed by Bankole’s move.

Sani said: “That’s a typical Nigerian politician for you. They don’t believe in building but sharing. I thought with his age and experience, he will show good example. His step is most unfortunate but we aren’t disappointed.”

You are gay if your wife sucks your manhood — Popular Apostle