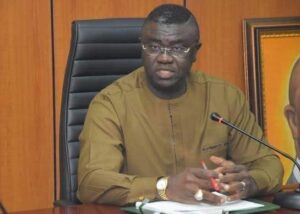 The Minister of State for Budget and National Planning, Prince Clem Ikhanade Agba has received commendations for championing people oriented based projects across Nigeria and for being at the forefront of project execution for the President Muhammadu Buhari administration.

A delegation from the Erhurun-Uneme National Development Association, (EUNDA) in Akoko-Edo local government area of Edo State gave the commendations when they paid  a courtesy visit to the Minister at his country home in Uneme-Uzanu in Etsako East Local Government.

Leader of the delegation and President of Erhurun-Uneme National Development Association, Mr.Olu Joel described Agba’s passion to always ensure projects initiated by the President receive necessary budgetary allocations for their executions as heartwarming and worthy of emulation.

He said the Minister has shown that President Buhari picked the right candidate for the job affirming that since his assumption of office, Agba has not let the administration and Edo state down as a representative.

While thanking the minister for his efforts in ensuring the federal government captured the construction of the Erhurun-Uneme community road in the 2021 federal fiscal budget, he prayed for God’s guidance for the Minister and the Buhari’s administration.

He said “We are here to express  profound gratitude to you and the President Muhammadu Buhari for listening to our cries over our deplorable road and the administration’s magnanimity in capturing its reconstruction in this year’s budget. Our joy knows no bounds as your efforts have brought smiles to every Erhurun-Uneme man and woman. We asked that you also convey our gratitudes to Mr President for his magnanimity.”

Responding, Prince Clem Agba  thanked the delegation for the visit and described the Erhurun-Uneme road as one that has tremendous economic importance to the state and the country at large affirming that as an agrarian community, farmers in the area and surrounding communities can transport their farm produce to urban centres with ease thereby boosting food security for the state and the country.

The Minister said “The road project has been listed in 2021 budget under Federal Roads Maintenance Agency, FERMA. On our part, we will ensure the funds are released. I urged you people to do a thorough follow up.”