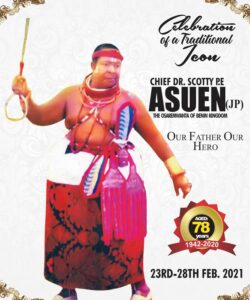 It was the English Poet and master of English Sonnet – *John Donne* who posited in his evergreen Poem- “Death be not Proud”, thus:

*Death be not proud, for though they call thee mighty and dreadful.For death shall be no more, death thou shall surely die*

And so was the futility of death as *Chief (Dr) Scotty Paul Emwinromwanekhoe Asuen (JP)* achieved immortality by joining the anscetors ,as to live in the heart of those who love you, is not die .

*It is my estimation, that the real test of a man’s pedigree is not the houses he has acquired,or the money in his account when he dies ,it is determined by the educational pedigree and societal standing of his children and how he has affected positively those who he came across*.Chief (Dr.) Scotty Asuen invested heavily in the education of his children, *one of whom is my friend-Hon. Valentine Asuen-the CEO of DVD Oil Group* .All the Children of Chief are all excelling in their respective endeavours.He has affected the lives of countless persons in the Society,whom he has shown magnanimity to.Some of whom he does not even know .Real generosity is when you give with out expecting a reward .Indeed, there is a reward which comes from God .

Elegant, Charismatic and astute Chief Scotty Asuen was born on the 22nd of April,1942,in Iguemokhua in Orhionmwon Local Government Area of Edo State of Nigeria. He enlisted into the Nigerian Army ,during the Nigerian Civil War and retired meritoriously from the Army and ventured into business ,where he thrived in different strata of the Nigerian Economy ,employing teeming Youth and giving a fillip to the Local Economy in the then Bendel State and now Edo State .He set up GEJSA Nigeria Limited, which was an acronym for his first five children and which Company was a major player in the Construction, Real Estate and Sundry Sectors of the Nigerian Economy.

He was known for his benevolent character and his magnanimous disposition. It is perhaps in recognition of this feat, that he was bestowed with the Prestigious Title of the Osarenwanta of Benin Kingdom,by the Oba of Benin.

The events kick starting the obseqiuos of the legend ,caused a stir in the ever busy Benin Sapele Road ,Benin City and the Country Home Pricinct of Benin as there was a huge traffic gridlock all day long ,owing to the incessant flow of pedestrian and vehicular traffic ,depicting the fact that he was friend to princes and a benefactor to the poor .

And so ,Chief Scotty Asuen went home in a blaze of Glory,as there was a deluge of tributes from the high and mighty and Influential Organisations in the Society.

I herein make reference to the immortal words of *Hon Patrick Obahiagbon* the grandiloquent ,but profound Legislator Par Excellence ,who posited on the life and times of Chief Scotty Asuen in his tribute to him, thus :

*Chief Scotty Asuen was indeed a coruscating gentleman and an ambassador of the Benin Cultural Gregor, who was profoundly flambouyant as he was quintessentially a paragon of humility and affability*.

*Dr Ehioge West-Idahosa* of Counsel ,aptly dubbed the Cicero of the House of Representatives, for his unparalleled erudition while a Member of the House , had this to say about the departed Patriach ,in his tribute :

*How can one ever forget Chief Scotty Asuen?Growing up as a young lawyer ,then in the Chambers of C.O. Ihensekhien SAN of blessed memory ,I had frequent interaction with this noble chief .He was very witty and had a sonorous voice .A Clever man who had the details of his business transactions on his fingertips. Gorgeous in his outlook, he was a power dresser with a commanding presence*

And so it was Ralph Welda Emerson that said :

*It is not the length of life that matters ,but the depth of life*

Chief Scotty Asuen has lived a good and exemplary life worthy of emulation,that has impacted positively in people’s lives .You judge the life of the dead ,by the way he is she is viewed by the living .

It was Williams Shakespare who said in his Play “Julius Caesar”, thus:

*When beggars die, there are no comets seen; the heavens themselves blaze forth the death of princes*

And so ,was the case of Chief Scotty Asuen,the Osarenwanta of Benin Kingdom , like Julius Caesar, *Veni, vedi, Veci”, which in English is paraphrased as *He came, He saw and he conquered*

May the benign, gentle and benevolent soul of Chief Scotty Asuen rest in the bosom of our Lord and Saviour.

This Eulogy is a reminder for the rest of us that are alive . *What will people say about you , when you are dead .Pause and Ponder*!

On the essence of life , *Abraham Lincoln*, the 16th President of the United States, posited thus:

And in the end, it’s not the years in your life that count; it’s the life in your years•

About the Author:
Douglas Ogbankwa Esq.,is the immediate past
Publicity Secretary of Ngerian Bar Association (NBA) , Benin Branch and the Convener of the Intellectual Hub of which the son of the deceased-Hon Valentine Asuen is a Member .

Prime Issues on the Edo State House of Assembly; By :Douglas Ogbankwa Esq