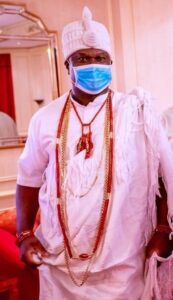 The monarch who spoke through his spokesman, Moses Olafare, said no true Yoruba son or daughter would speak in such a manner as Mr Adeyemo has spoken, saying his conduct and attitude cast doubt on his true intention in his “self-saddled responsibility of defending the Yorubas.”

The Ooni’s spokesman, Mr Olafare, said Mr Adeyemo was going overboard in his conduct and that he should not believe that he is bigger than the authorities.

He said; “We have not made any official statements on the matter and the matter does not really make any sense to us. If somebody who identifies himself with the cause of Yoruba could be talking in that manner about the Ooni who is indisputably a spiritual head of the race, then one must wonder whether or not the person has been representing us truly. It gives room to people to suspect your motive.”

On the threat of violence, Mr Olafare said; “Well, he said that in a video that is well circulated and the video must have gotten to security agents who would see beyond what we are seeing. It is a threat to life if you say that if somebody is going, you’re going to waylay that person and fire him. If you’re bold enough to say that, to anybody not to talk of even an Ooni of Ife, I believe that security agents will see that as a threat to life. While we’re not ready to report any matter to security agents, I believe that they will know what to do.”

See Image of Cleric, Sheikh Abubakar Gumi in a meeting with bandit leaders in Zamfara